Santorini June 2006
Jean Sippy and Joan Waters skipped the AGM this year and went to Santorini with a Bristol University field trip, led by Prof Donny Huttton and Dr Peter Hardy.
Santorini is made up of five islands in and around the rim of a volcanic crater. It is most famous for the event in about 1500BC when the island’s central volcano erupted. When the crater collapsed sea water entered causing a tsunami which was thought to have contributed to the collapse of the Minoan civilisation on Crete.
The event is referred to as the Minoan eruption and the four stages of the eruption produced four cream coloured layers of pumice (with various degrees of mafic inclusions) called Minoan 1, 2, 3 and 4, which we soon learnt to recognise.
What is not generally known is that there were at least four other volcanic centres on the island erupting before the Minoan eruption. These rocks are mainly coloured so in most cases easy to distinguish from the Minoan deposits, but are of a very complex nature consisting of lavas, pyroclastic flows, cinder cones and more. Several of these centres were effectively sectioned by the Minoan eruption so the current crater gives a view of their internal dykes.
There is a core of upper Triassic crystalline limestones, which forms Mt Profitis Ilias, the highest point of the island. This was uplifted by the collision of the African tectonic plate with the Eurasian plate. This collision is the cause of the volcanism.
In the centre of the caldera is the growing new volcano of Nea Kameni. The Santorini volcano has had twelve major eruptions in the last 600,000 years and this new volcano is expected to grow and have another major eruption in the next 20.000 years. The last small eruption was in 1951 and the last significant earthquake was in 1956 which badly damaged the northern village of Oia.
For the archaeology, on the Megalo Vuono promontory next to Mt Profitis Ilias is the Ptolomeic old capital, Old Thera. In the south of the island is Old Akrotiri the pre-Minoan settlement overwhelmed by the Minoan eruption.
The other significant aspect of Santorini is its beauty. The blue of the sky, the blue of the sea, the white and blue of the houses and churches, one can understand why the Greek flag is blue and white.
See photos from the trip below.

Mt Profotis Ilias on the left and Megalo Vuono on the right.
This is the highest point of the island and is composed of limestone.

>> Scroll right for the next photo:
The Minoan deposits showing the four stages of erruption.
Note the bombs embedded in the layers. 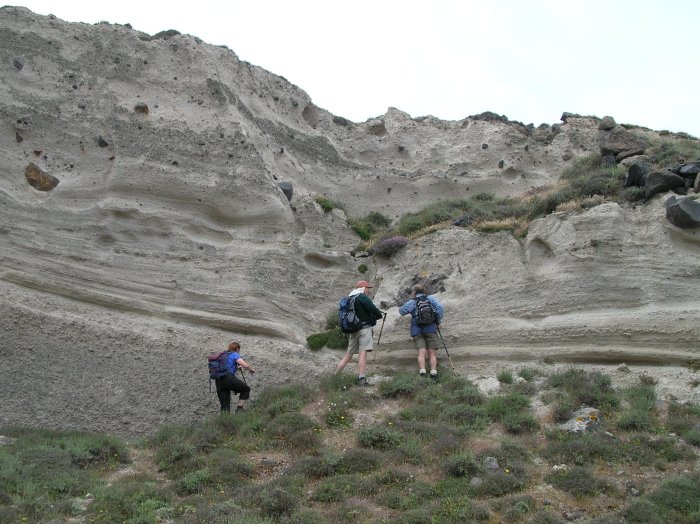 Red Beach near Akrotiri. The fissure that these pre-Minoan erruptions extruded from can be seen on the right.
The paler Minoan deposits form the new land on the left.
Scroll down for : Nea Karmeni, the new volcano forming in the centre of the caldera. 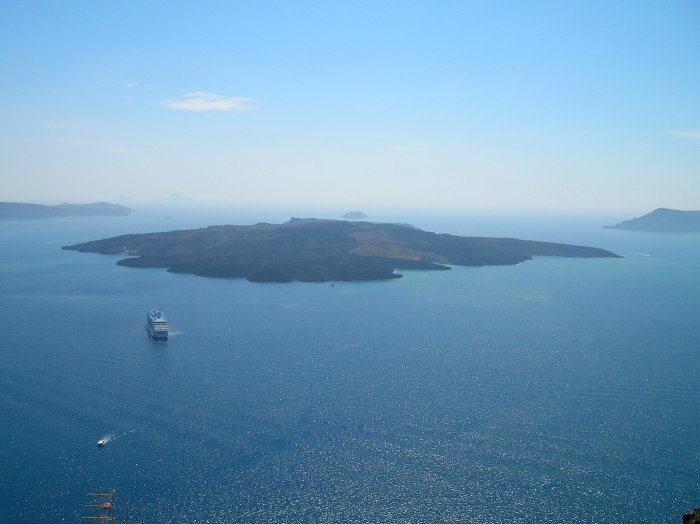 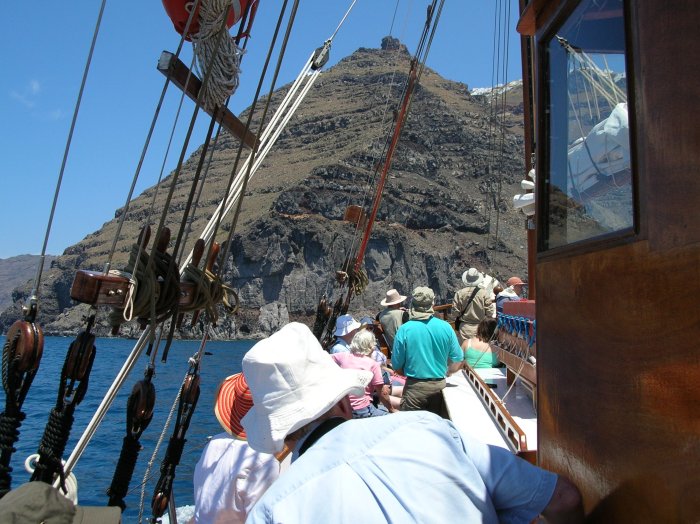 Above:
Approaching Skaros in the boat. This was the site of the Island's capital in the 15th Century. Prints exist showing many houses clinging to the side of this promontary.


Right:
This shows a dyke where the lava forced its way through a pre-existing fault. The downthrow on the right is clearly visible. 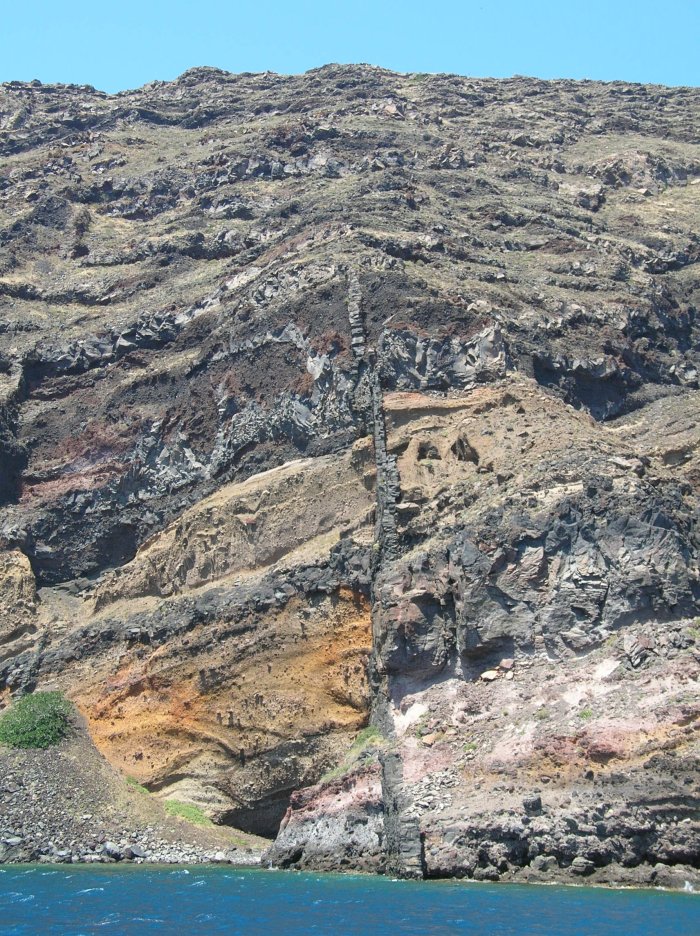 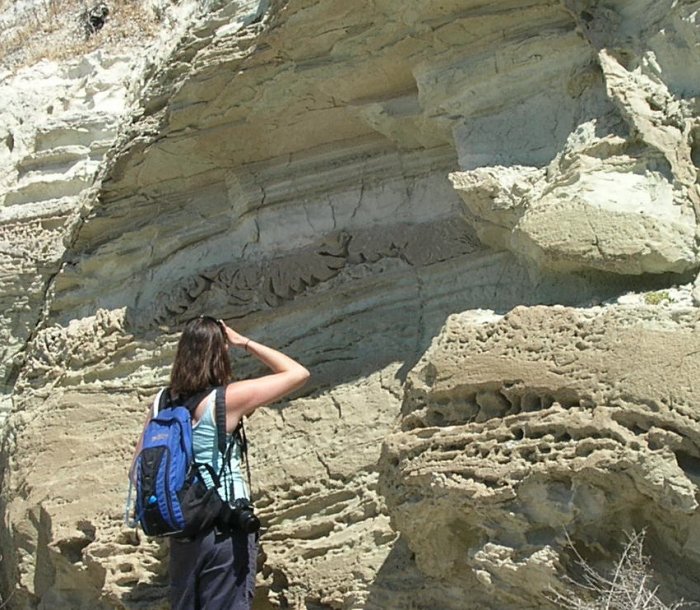 It is a matter of conjecture what caused this massive distortion in otherwise level deposits. 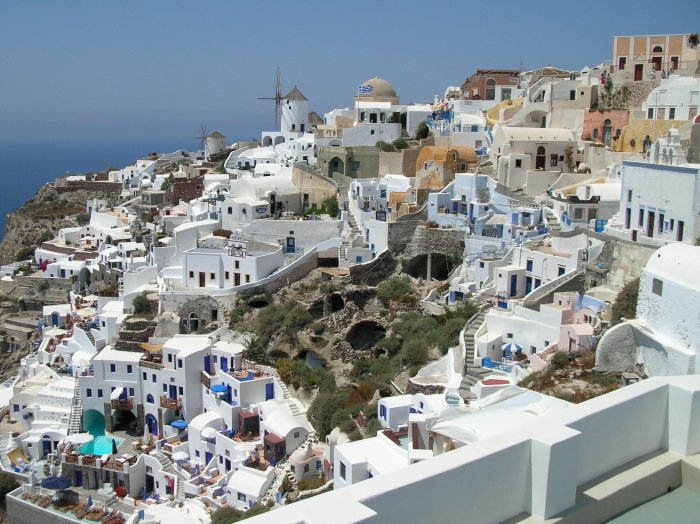 This shows the idyllic village of Oia. Closer inspection shows the unrepaired damage from the earthquake in 1956.

Previous Next
Sicily September 2005
I wanted to go to Sicily but did not want to go alone so I asked around and in the end ten of us, Sally and David, Pat and Ron, Allan, Mike, Jean, Pat, Maureen and I set off. We booked into a small hotel in Taormina, close to the town centre. Taormina is perched on a promontory of Mesozoic limestone on the north east coast of Sicily. Pictures of Taormina show it dominated by the volcano, Mount Etna, but it was shrouded in cloud for most of our visit. Apart from the cloud around Etna the weather was perfect.
Sicily is the product of the subduction of the African plate under the European plate. This also produced Mount Etna, the last and most active of the chain of volcanoes running through Italy.
We tried public transport to begin with but it was a bit unreliable, so for the big excursions to the Aeolian Islands, Agrigento and the Villa Casale we went on organised tours. This involved us getting up at 5am to catch the coach at 6.15 am at the local coach station.
For the trip to Syracuse we travelled south past Catania. The railway and the motorway are both cut through lava flows on the way south to Catania. In fact Catania was badly damaged by an Etna eruption in1669.
On arrival in Syracuse we made for the museum which was very comprehensive and well laid out. After that we went to the Archaeological Area dominated by a vast Greek amphitheatre carved out of the solid limestone. From here we got a tremendous view over the city. Near the amphitheatre were the quarries from where the limestone was obtained to build the city. According to the books the Pliocene limestone was quarried using a pillar and stall type process, however successive earthquakes have brought down the roof and it is now an open park with big boulders. One of the caves remaining at the edge is named the Ear of Dionysius because of its shape and acoustics: the other and one is called the Cave of the Rope Makers. This made use of the fact that the damp atmosphere made the hemp more manageable.
In the centre of the island is a large roman villa, Villa Casale, with very many finest quality mosaics in different styles from the formal geometric, to athletes, to spectacular hunting scenes. We visited it on the way to Agrigento, a city and temple complex on the south coast, built of calcareous sandstone.
We took a train journey on the Circumetna railway in the foothills of Mount Etna, where the line was cut through lava flows.
Our most interesting trip was the Aeolian Islands of Lipari and Volcano. These old volcanic islands have been eroded and shaken by earthquakes so the years of volcanic activity have been exposed in places. Lipari has been inhabited since about 3000BC because it is a source of obsidian. Currently the there are large mines where pumice is exported for cement. On volcano it is impossible to escape the sulphurous smell. Below the, still-active, main crater is a side crater from the last eruption in 1888-90 and the basalt lava flow. A local vulcanologist told us this is where they expect the next eruption.
A thoroughly enjoyable trip, with still more to see.
Joan Waters
See below for photo's from this trip. The first shows Isola Bella, a limestone outcrop at the base of the Taormina Peninsula. 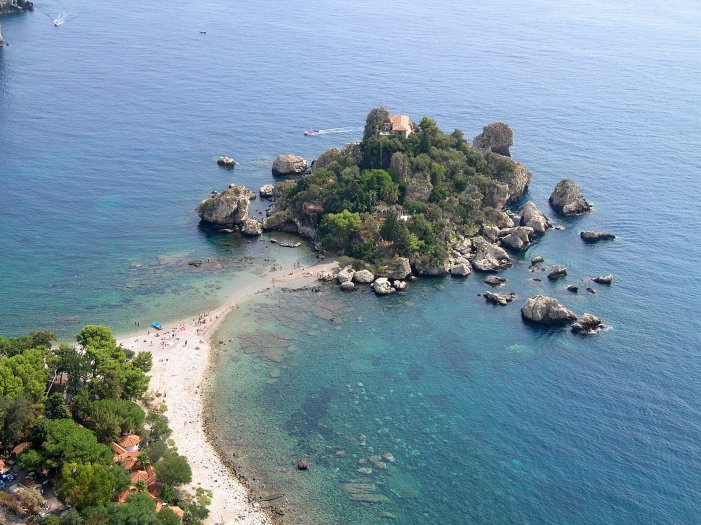 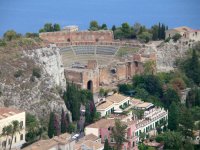 Below: Bronte station on the Circumetna Railway. The line is cut through at least two layers of lava. 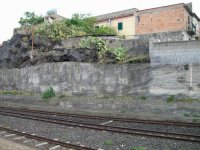 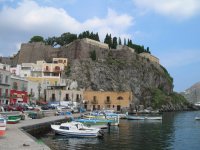 Above: The Citadel at Lipari harbour. This island has been inhabited since 3,000 BC and is a source of obsidian.

Below:
The quarry at Lipari exports pumice for cement making. 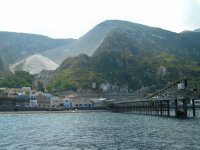 Above: This volcano on the island of Volcano has steam coming from the main crater. The side vent is the scene of the last eruption in 1869. Local volcanologists expect the next eruption to be here; which could prove interesting for the inhabitans living below.

Below: The temple of Heracles at Agrigento. It dates from about 500 BC. The pillars are made of calcareous sandstone. 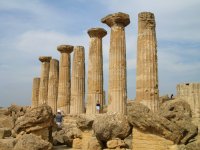 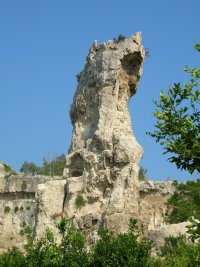 This is the quarry from which stone was extracted to build Syracuse. It was originally mined using pillar and stall techniques, but subsequent earthquakes have brought down the roof leaving a park with interesting remnants.