HHGS President, Dr David Brook, OBE, is a chartered Geologist, Fellow of the Geological Society and of the Institute of Quarrying; he was chairman of the London Geodiversity Partnership (LGP) from 2011-15. He played an important role in producing “London’s Foundations: protecting the geodiversity of the capital” a London Plan Implementation Report for the Mayor of London in 2009, revised 2012.

Before his retirement, David worked for the Government department responsible for planning the country’s mineral extractions, such as sands and gravels, brick clay, chalk, hard rocks, slate and metals. He was Principal Scientific Officer at the Department of the Environment where he specialised in the integration of earth science with policy issues with respect to land-use planning. His research extended to mineral working, land stability, pollution control, flooding & the coast.

David’s detailed reports and reviews are to be found in many local and national geological magazines. He is a frequent speaker at HHGS monthly meetings on subjects as diverse and extensive as British minerals, landslides, tsunamis, china clay, gypsum and limestone mining. His depth of knowledge is evident from the fact that he has presented on far more topics than any other speaker in the Society’s history.

Scroll across below for extracts from David's talks (using arrows >)

The story of china clay

China clay (or kaolin as it is known internationally) is a white soft plastic clay mainly composed of kaolinite -- Al4Si4O10(OH)8. The name is derived from Kaoling (now Gaoling) in NE Jiangxi province in China, where it was worked for over 1000 years for the manufacture of fine white porcelain. Until the early 19th century, china clay was used almost exclusively to produce fine ceramics but the development of china clay as a filler in paper-making markedly increased demand, especially with the introduction of paper coating at the beginning of the 20th century, and since about 1914, 75% of total output has been consumed by the paper industry.

China clay forms by the alteration of feldspathic rocks often by volcanic, hydrothermal or weathering processes. The granites of south-west England have been affected in this way. The St Austell Granite is extensively kaolinised and this part of Cornwall has some of the most intensely exploited mineral-bearing land in the UK.

Tsunami – the wave that swallows people

Tsunami is a Japanese word meaning “great harbour wave” or “long wave in a harbour”. It is also known among the native inhabitants of the Andaman Islands in the Indian Ocean as “the wave that swallows people”. Most are generated by tectonic events such as fault displacement of the ocean bed during earthquakes but volcanic eruptions, submarine landslides and asteroid impacts could also trigger tsunamis.
In the geological record, a number of impact structures are associated with giant tsunami deposits. For example deposits from the tsunami generated by the Chixculub impact at the end of the Cretaceous period (65M years ago) are found on the margins of contemporary seas as far away as north Texas, over 1,500km away. Human activity can also lead to tsunamis, usually by inducing landslides but also by explosions.
In historical times, the 1755 Lisbon earthquake generated a tsunami that struck south-west England. There is firm geological evidence of a tsunami impacting Scotland and north-east England 8,200 years ago following a submarine landslide offshore Norway. The possibility of significant future events cannot be dismissed. Defra Flood Management Division, therefore commissioned a study by the British Geological Survey to make a preliminary assessment of the threat posed by tsunami to the UK.

Tsunami
The wave that swallows people 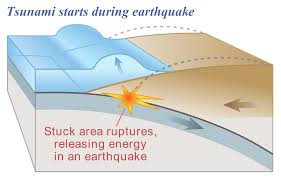 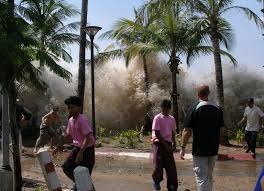 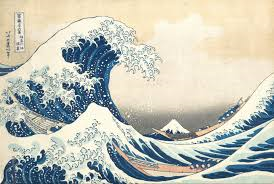 Landslides are mass movements of soil and/or rock under the influence of gravity. Movement can be slow or rapid and it may be continuous or subject to intermittent surges. Slopes will only move if the forces contributing to movement exceed the forces resisting movement.

In Britain the most notorious landslide occurred at Aberfan in South Wales when a colliery spoil tip became saturated and flowed down the hillside to overwhelm the village school and several houses, killing 144 people, most of them schoolchildren.